The Directing Change Program & Film Contest offers young people the exciting opportunity to participate in the movement by creating 60-second films about suicide prevention and mental health that are used to support awareness, education and advocacy efforts on these topics.  Learning objectives surrounding mental health and suicide prevention are integrated into the submission categories of the film contest, giving young people the opportunity to critically explore these topics. Program participants – whether they are making a film, acting as an adult advisor, or judging the films – are exposed to appropriate messaging about these topics, warning signs, how to appropriately respond to someone in distress, where to seek help, as well as how to stand up for others who are experiencing a mental health challenge. In addition, schools and organizations are offered free prevention programs and educational resources.

In 2017, NORC at the University of Chicago conducted a comprehensive evaluation with 131 youth participants. Findings from the study found Directing Change to be highly effective in increasing knowledge, behavior and attitudinal outcomes related to suicide prevention and mental health and demonstrated changes in school climate. Directing Change participants were found to be more willing to engage in conversations aimed at suicide prevention and have fewer attitudes that contribute to stigma about mental illness. Furthermore, participants more frequently agreed that suicide is preventable, identified more warning signs and were more willing to encourage others to seek help, beyond their own social circles. View the report here. 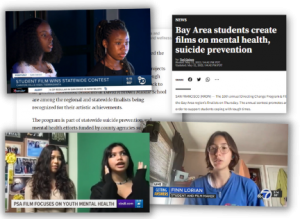 Directing Change Program Regional Winners media pitching in partnership with RSE resulted in several local stories. In addition, the press release about the statewide winners, award ceremony and announcement of All American as the 2020 Award Recipient was picked-up by a total of 129 publications, then published 360 times nationwide. It was picked up by 77 publications in the US, 30 of those in California including: The San Diego Tribune, California Latino News, Sweetwater Reporter, and The Associated Press.

Directing Change was a committee member at The Mental Health for US Unite for Change Forum on January 13, 2020. The event, part of a grassroots effort of the largest-ever collaboration of mental health groups around a national election, addressed the intersection of national mental health and addiction policy priorities and the 2020 presidential campaign.

Each Mind Matters announced 2018 Statewide Winners along with celebrity filmmakers and actors who received awards for their mental health advocacy work.

Chico-Enterprise-Record recognized Pleasant Valley High School and Butte College student winners for their films “Silence” and “I Am Not Ashamed,” which won second place statewide.

The Orange County Register mentioned first place winner Creston Brown for his film “First Steps” as well as winners Hallie Conrad and Megan Beehler whose films won in the Suicide Prevention and Through the Lens of Culture categories.

Torrey Pines High School students were also recognized on San Diego Channel 10 news for their 1st place regional winning film “Light at the End of the Tunnel.” Cristian Aragon, Jose Becerra, Nick Meraz and Jay Butler discussed the importance of making films to change the conversation about suicide prevention and mental health at their school. Watch the story here.

In 2016 films received 18 news media stories and the following publications:

Today.com featured Murrieta Valley High School student Ben Finnie recognized for his film “Leap of Faith,” which makes a plea for those in need of help to take that step and reach out to someone. Read the article here.

The Elk Grove Citizen highlighted student Ryan Santiago from Franklin High School for his first-place regional winning film, “The Guides of Life” which also won a first-place statewide prize in the Suicide Prevention category. Ryan’s animated film is about one friend experiencing thoughts of suicide and how his two close friends try to help him through it. It encourages people to reach out to someone during those times; to not be afraid to reach out for help.

UC Davis student Marielle Pastor won a second-place award for her film “This is Claire,” which creatively explores how college students can help fight stigma around mental health challenges. View the article here.

PR Newswire shared the outcome of the 2016 statewide award ceremony which recognized first-generation college students, Amanda Deda and Alejandra Vaca who envisioned the creation of a short film that would express some of the barriers they faced when accessing mental health services. The first-place film “The Language of Healing” was submitted in the Through the Lens of Culture Mental Health Category.

The Fresno Bee recognized Clovis East students who won the second-place prize in the Through the Lens of Culture category at the 2015 Directing Change Award ceremony for their film “Depression has No Culture.”

Students from Canyon High School, Katella High School, and San Juan Hills High School were recognized by the Orange County Register for their films advancing to the statewide round of judging.

The Record Gazette highlighted four members at the Boys and Girls Club of the San Gorgonio Pass who wrote and directed the video, “Speak Out.” The film depicts a straight-A basketball player who has started to lash out socially and withdraw from activities, and how his friends talk to an adult who connects the youth with help.

Fox40.com covered Whitney High School’s broadcast program students who won more than a dozen awards locally, regionally, and nationally including first and third place awards for their Directing Change films. This is the greatest number of awards they have won in one school year.

If you are experiencing an emotional crisis, are thinking about suicide or are concerned about a friend call the National Suicide Prevention Lifeline immediately: 1-800-273-8255This is a free 24-hour hotline.